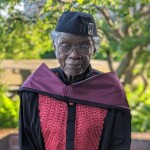 If you can’t find Mahmoud El-Kati in his apartment at the Kenwood Retirement Community, look in the library or the workout room. At age 86, Mahmoud continues to seek, and create knowledge and keep himself physically healthy. He is a long-time activist, teacher, lecturer, writer and commentator on the African American experience. Despite the continuing struggle of our country to face our history of slavery and racism, Mahmoud remains optimistic. He feels that “human beings can change their attitudes.”

Mahmoud credits his family, particularly his grandmother, with his abiding interest in words and learning. He recalls that she was a first-generation freeborn Black woman who was an avid reader of multiple Black newspapers. Her circle of elder friends in the Black community were also an enduring influence. Read More >>

Building Community through Lifelong Learning at the Kenwood Retirement Community Ruth Anne Olson and Anthony Morley have been enjoying life at the Kenwood for 18 years. Anthony discovered the Kenwood when he took an OLLI (Osher Lifelong Learning Institute) class on women poets. The couple had already been thinking of moving. They wanted to stay in the city and the location was walkable and on bus lines. Ruth Anne hadn’t lived in a high-rise for a long time, and she felt young again when she moved in.

Anthony and Ruth Anne have a busy life outside the Kenwood, so they typically don’t join a lot of the offered activities. But they do love the breakfasts, and the ability to sit down with any resident and be guaranteed to have an interesting and informal conversation. Read More >> Kenwood Retirement Community resident Sally Howard is a go-getter. She’s friendly, energetic, and a great listener. During the pandemic, when social isolation was the norm, an attentive housekeeper at The Kenwood noticed that Sally and another resident had the same painting, a scene from Puerta Vallarta in Sally’s beloved Mexico. The housekeeper asked Sally to pay a socially-distanced visit to the other home-bound resident. Sally was thrilled to be able to chat with a new friend.

Sally is a graduate of Macalester College. She majored in sociology and English, but also participated in many extra-curricular activities such as choir and the tennis team, a habit that has continued through her life. Sally says she has a short attention span when it comes to her career, as she changed jobs every five to ten years when she wanted a new challenge. With each assignment she learned and grew, stayed connected to many interesting people along the way, and helped others reach their potential while reaching her own. Read More >>

Tilting at Windmills in a Lamborghini – Ray Harris Long-time Minneapolis developer Ray Harris moved into The Kenwood Retirement Community in January of 2020. After a fall, he spent a few months in the hospital and rehab, and returned to the Kenwood in March, at the beginning of the COVID-19 pandemic. He says he is “making the best of it” but he is doing more than that. He’s started a blog, “Been There, Done That, Took Notes.” It’s a love letter to Minneapolis, filled with stories about streetcars, offleash dog parks, baseball, Orchestra Hall and more, projects that Ray himself developed, or historic reminiscences. He writes out the content for the blog in longhand, and gives it to The Kenwood’s Executive Director, Jennifer Volkenant. She in turn scans it and sends it to Ray’s granddaughter and she and her uncle work out the technical aspects. Read More >>